Welcome to The Emmerdale Wiki!

The Emmerdale Wiki aims to be the definitive online encyclopedia of over 40 years of Emmerdale,
from its origins as Emmerdale Farm, to the modern soap opera of today.

This wiki currently has at least a stub article for all episodes broadcast to the end of 2012 - from one to 6437, all but two of which were added in chronological order, making using the wiki's search facilities (e.g "WhatLinksHere") much easier. Currently, links to all episodes can be found via Category:Episodes or the Calendar
This is a wiki which means anyone can edit, so YOU can help improve the site! New to wikis? Check out the editing help guide!

After 140 'celebrities' over thirteen series, Big Brother finally has a former Emmerdale star as one of its contestants. Claire King, still best known for her role of Kim Tate, was the third housemate to enter the 14th series of the reality contest last night, where she will stay in the house for up to four weeks. In her introductory VT, Claire said "I'm excited about going in the Big Brother house but I'm also nervous. Although I've got to the age now where I don’t care what other people think of me." Just before entering she told host Emma Willis "I'm gonna throw myself into it and really enjoy it".

The nominations for the annual awards of weekly magazine Inside Soap are open until September 8th. Last year Emmerdale won the top "Best Soap" prize, so be sure to cast your vote! Full details at www.insidesoap.co.uk/voting-now-open-inside-soap-awards-2014/

Website Digitalspy has published an extensive interview with Emmerdales series producer, where she talks about recent storylines and discusses her plans for the future. Part one can be read here, and part two here. 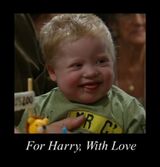 Tonight's episodes of Emmerdale were dedicated to Harry Whittaker, the child who lit up the screen as Leo Goskirk. A caption at the end of the 8pm episode read "For Harry, With Love". A subsequent official statement said: "Very sadly we can confirm Harry Whittaker's passing last Tuesday 1st July. We will all miss him greatly and have offered our sincerest condolences to his family at this very sad time."

Harry had played Leo since the characters birth on 31 May 2011, initially sharing the role with another baby. Ahead of tonight's broadcast Dominic Brunt tweeted "A fitting tribute to a special friend at the end of tonight's episode of Emmerdale. x". Mark Charnock also tweeted to say we should watch the credits, and after the episode posted a picture of Harry in a spiderman outfit, with the message: "Our superhero. We were lucky to know you and hear your laugh. You lit up our lives, dearest, loveliest Harry." Zoe Henry retweeted Dominic's and Mark's messages and changed her profile picture to that of Harry in his spiderman outfit. EmmerdaleWikis thoughts are also with Harry's family at this sad time.

After the biggest public vote ever, the 16th annual British Soap Awards ceremony was held at the Hackney Empire on Saturday night and televised yesterday, which included a tribute to Richard Thorp. Emmerdale came away with the Spectacular Scene of the Year award which they won for a seventh time.

The shortlists for the 16th annual British Soap Awards were announced yesterday, with Emmerdale making it onto the shortlists for Best Actor, Sexiest Male and Villain of the Year, as well as Best Soap in the viewer-voted categories. As last year, each soap is nominated in each of the panel-voted categories (with Doctors again having the sole exception, this time for missing out in the Best Newcomer category), but this year for the first time in the awards' history the Best Exit category has been excluded. To cast your vote in the viewer categories visit www.britishsoapawards.tv before 3pm on May 23rd! 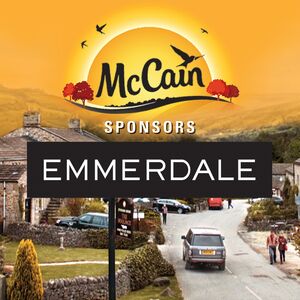 McCain, the frozen food manufacturer, has been announced as the new sponsor for Emmerdale in an £8 million deal. Commencing from 7 April, and lasting for two years, the deal encompasses online and mobile platforms as well as broadcast sponsorship, and allows McCain to use the Emmerdale brand in their own marketing and promotions. The McCain name will also appear within episodes where appropriate.

Speaking of the deal, ITV's commercial content director Gary Knight commented: "Emmerdale is one of ITV's most iconic programmes and we are delighted to welcome a brand with the stature and heritage of McCain as the new sponsor of the show for the next 24 months. We look forward to working with them to make this truly integrated partnership a great success."

Read more about the deal at www.campaignlive.co.uk. 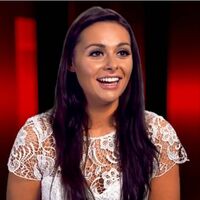 The Scarlett Nicholls actress appeared on the show that searches for new singing stars tonight on BBC1. She sung The White Stripe's song "Fell in Love with a Girl", hoping to impress the judges enough to make them turn their chairs round and face her - thus earning her a slot with one of those judges in the second round. Find out how she fared via the BBC iPlayer (Kelsey's section starts at 33:28).

The shortlist in each category for this years National Television Awards has now been announced. As well as Emmerdale being nominated for Serial Drama, its star Michelle Hardwick - who got engaged on New Year's Eve - has made it onto the Newcomer list. To cast your vote, visit http://www.nationaltvawards.com. Voting for the final round is open until midday on 22 January, with the ceremony being shown live from 7:30pm that evening on ITV. 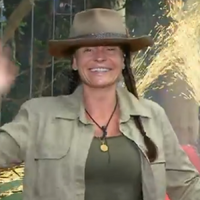 After three weeks, Lucy Pargeter left the I'm a Celebrity... jungle just one day away from the final of the reality contest. A keen teamplayer, and willing to speak her mind, her time is most likely to be remembered for her difficult relationship with beauty queen Amy Willerton, with whom it was shown she had difficulty seeing eye-to-eye (although it has been suggested - including by her other campmates - that the editing of the show made this look far worse than it actually was). Lucy - the last female standing in the contest - described the experience as "mentally hard" and, never expecting to win, was simply excited about being reunited with her family. Congratulations on getting so far! 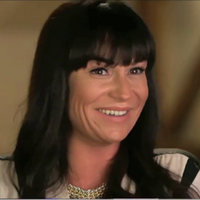 Tonight Lucy Pargeter was seen entering the Australian wilderness for ITV's I'm a Celebrity... Get Me Out of Here!. Speaking earlier in the week Lucy revealed how she came to agree to appear: "I am bricking myself now about going into the jungle. You start thinking 'Why am I doing it? Why am I putting myself through it?' I do tend to make all my decisions in life on the spur of the moment. I don't really think about it. But at the same time, there comes a time where it's good to make myself do something I would not normally do. I am 36, I don't challenge myself, I don't do anything out of the ordinary."

After being known for so many years as Emmerdales Chas, Lucy admits she finds people seeing her as herself weird to get her head around. "That is the most worrying part, really. I am most scared of the fear of people not liking you. But I want to give everything a go. The challenges are not there for you to enjoy. They are there to cause you grief and make people laugh!" 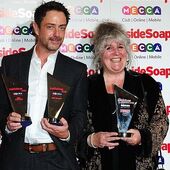 At Inside Soap Magazines annual awards ceremony tonight Emmerdale scooped four awards including Best Storyline (awarded for first time since 2009, and last won by Emmerdale in 2006); and the major award for Best Soap, for which spokeswoman Charley Webb (Debbie) said how unbelievably proud the whole team were and thanked producer Kate Oates and of course the viewers! Emmerdale also received a special Outstanding Achievement Award for the live episode. Congratulations to the team on your deserved success!

A new online initiative launched yesterday features news items for Hotten and Emmerdale (contains international spoilers), while the main itv.com/emmerdale website has also been given a makeover.

Retrieved from "https://emmerdale-wiki.fandom.com/wiki/The_Emmerdale_Wiki?oldid=16357"
Community content is available under CC-BY-SA unless otherwise noted.